Shea Homes, one of the homebuilders who recently opened a model in the new Village of Sawmill Lake in Sienna Plantation, would like to introduce themselves to you. Shea Homes is new to the Houston area, so you may not be familiar with the company . . . yet.

But did you know that Shea Homes is one of the nation’s leading homebuilders, having built more than 94,000 homes nationwide?  In Professional Builder’s 2015 annual Housing Giants list, Shea Homes ranked No. 14 in the country when ranked by revenue, moving up from No. 17 on the 2014 list. That ranking makes Shea Homes the largest privately-held builder in the country.

Sienna Plantation is the company’s second community to open in Texas. Shea Homes will be expanding its presence in the greater Houston area opening several additional communities over the next year.

Shea Homes’ plans in the Village of Sawmill Lake are priced from $399,990 to $489,990 and range from 2587 to 3677 square feet with three to five bedrooms and multiple master bath designs for each plan. Shea’s flexible floor plans feature many options for home buyers to personalize their homes.

Stop in and introduce yourself. A furnished model home is open daily at 9807 Cameron Way. For more information, contact Chuck Cain at 832-869-4024. 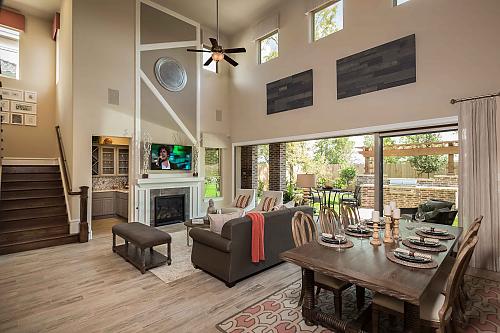