Sienna is already known for its over-the-top amenities and big-hearted residents. Soon it’s going to be known as the birthplace of Sienna Sauce, all thanks to amazing young entrepreneur and Sienna resident Tyla-Simone Crayton and her new friend Kendra Scott.

Seventeen-year-old Crayton, who developed Sienna Sauce at age 8 and is now chief executive officer of the wing-style sauce company, appeared on Shark Tank earlier this year to see if one of the hosts would invest in her company. Kendra Scott said yes, promising $100,000 for a 20 percent stake in Sienna Sauce.

“I am your Shark,” Texas-born Scott said. “I think you have an amazing, amazing product. I know I can help you build this brand. I love your product and I can help you make this happen. I went through this so I will save you so much money and time.”

Crayton says she created the sauce after her favorite wing store closed down. Originally Sienna Wings, she and her mom sold the wings every Friday out of their Sienna home. In 2017 — at age 14 — Crayton launched her business.

Currently, you can order Sienna Sauce online and you can find it several places around the Houston area, including three in Sienna — H-E-B, Harvest Market and Bean Here. Some Wegman’s grocery stores in New York and New Jersey also carry the sauce. A couple of Cincinnati grocers stock Sienna Sauce, as well.

It won’t be long, however, that Sienna Sauce will be on shelves — and kitchens — everywhere.

Want to see Crayton and mom Monique on Shark Tank? View it here. Lucky enough to already have Sienna Sauce in your pantry or plan on ordering some soon? Here are some tasty recipes to try. 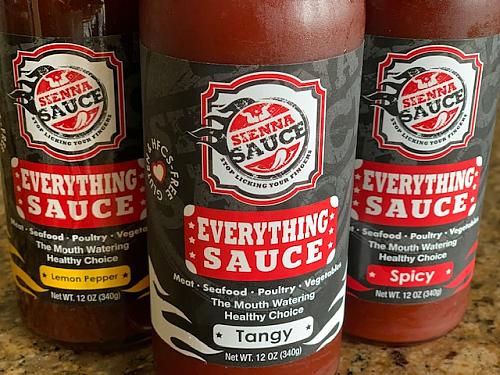