Melissa Hayslip Gets the Skinny on Sienna Plantation

Written by long-time resident Melissa Hayslip, the Sienna Skinny celebrates everything Sienna, with the 411 on community events, local school happenings and Hayslip’s musings about the community she loves.

Her posts cover everything from her love of Sienna Plantation’s Frost Fest to the Ridge Point Homecoming Parade. She also checks out the vibe at area restaurants including Vino & Vinyl and Brandani’s.

If it’s in or near Sienna, Hayslip knows about it, having moved to Sienna in 1999 with her husband Matt and two sons. Her love for the close-knit community was cemented when friends and even total strangers stopped to offer assistance to her oldest son after he suffered a minor bike accident. Since her move 17 years ago, Hayslip has become a fixture in the Fort Bend County community, serving as past president of the Fort Bend Junior Service League and involved with the American Cancer Society’s Couture for the Cause since 2011. She was named a Fort Bend Jewel by Fort Bend Focus Magazine in 2012. The Dulles High School alum is an active member of the Harvest United Methodist Church in Sienna and serves as the congregation’s Prayer Ministry Team Lead. In addition to volunteering, Melissa enjoys Aggie football and spending time with friends and family.

Another passion of Hayslip’s is attending Sienna Plantation’s numerous happenings, and readers will find a full listing of upcoming events on her blog. 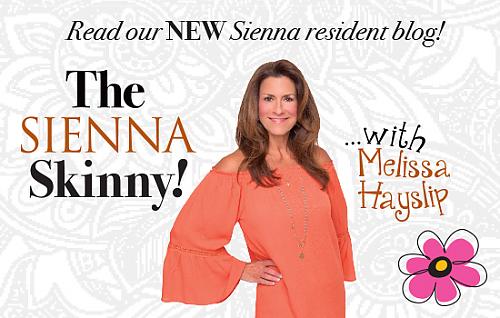