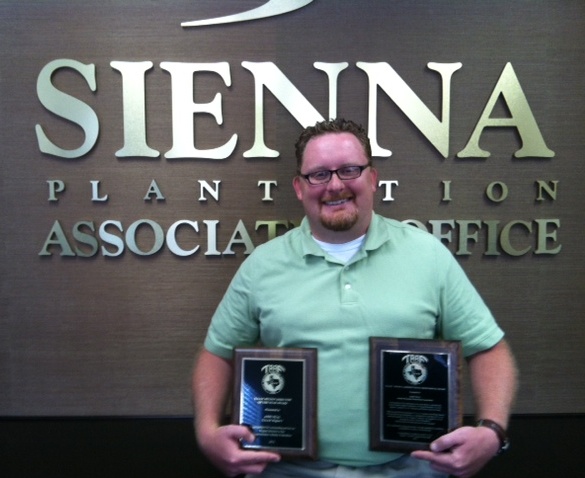 SPRAI is proud to recognize Andy Peal, SPRAI's Recreation Supervisor, who recently received the 2012 Texas Amateur Athletic Federation "Susan Gerred Young Professional of the Year Award" at the TAAF Annual Conference in New Braunfels in September.  This award is presented annually to an individual 35 years and under who is actively involved in TAAF and has been responsible for exemplary advancement of TAAF programs in their city/community. TAAF is a non-profit organization established in 1925 to create and maintain the highest ideals of amateur sports in the state, promote the development of physical education and to encourage the standardization of rules of all amateur athletics, games and competitions.   Over 140 organizations are involved in TAAF including 210,000 individual state participants. Andy currently serves as the TAAF Region 1 Director for the Greater Gulf Coast region and also serves in several other leadership committee roles.

Andy has been instrumental in the development and expansion of Sienna's youth sport programs including, but not limited to, the startup of Sienna's Youth Basketball program and Flag Football program. With Andy's efforts, Sienna was represented for the first time in the 10,000+ TAAF Games of Texas event with the Sienna Sharks Swim Team participation in both the Regional and Statewide Competition.  SPRAI is extremely proud of Andy's outstanding commitment to the enhancement of youth and adult sport programming in the Sienna community.