The results are in and Ron Brandani has been voted the resident who best represents master-planned Sienna Plantation during the “I Am Sienna” contest – winning $5,000 for the Connor Man Defeat DIPG Foundation in the process.

A total of 15,320 votes were cast during the online competition in which five well-known Sienna residents vied to win the $5,000 donation for their favorite charity.

“I am awed by the community’s support,” said Brandani, owner of Brandani’s Restaurant & Wine Bar in Missouri City. “I love everything about Sienna Plantation and I am proud to represent it. One of the many things I have noticed in the 10 years my family and I have lived here is the willingness of the community to support each other and give generously to local charities.”

“The work Connor Man does is so important,” Brandani said. “There is no cure and no effective treatment yet. Not many people even know about it, but it is devastating. The $5,000 prize will go a long way toward funding the research they do.”

The foundation was created in memory of Connor Michael Olympia, who was diagnosed with DIPG shortly after his fourth birthday. He passed away less than a year later.

Christen Johnson, Senior Vice President of Marketing for Sienna developer Johnson Development Corp. congratulated Brandani and thanked all of the participants who lent their names and faces to the promotion. 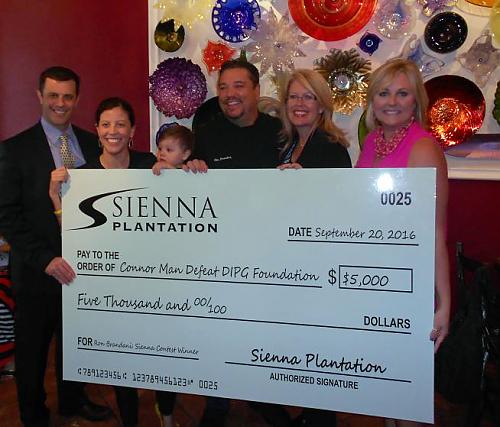