The first home sale in the Village of Sawmill Lake in Sienna Plantation did not happen by chance. It was the result of a very determined effort requiring a diligent eye and quick action.

And thanks to their persistence and that of their Realtor, Lynnsey Tirey and Johnathan Acord are getting the home – and neighborhood – of their dreams.

“We were already sold on the Sugar Land/Missouri City area, but when our Realtor showed us Sienna Plantation, we thought it would be perfect,” Tirey said. “It has a great location, is safe and very clean. When one of Johnathan’s friends who happens to live there gave it an enthusiastic thumbs up, we were sold.”

The couple was also sold on Perry Homes, particularly a three-bedroom, open-concept design.

“They really liked this Perry design that we saw in another neighborhood, but they wanted to live in Sienna,” said Realtor Sandy McClusky with RE/MAX Fine Properties. “We visited with Nory Mims at Perry Homes and asked if this plan would be available in their new neighborhood in the Village of Sawmill Lake. Lucky for us, it was.”

To ensure Tirey and Acord were able to get the plan they wanted, McClusky carefully watched when the Village of Sawmill Lake homesites were being released to the builders.

“I heard the homesites were being released and Lynnsey and I were there right away, picking out a corner lot with beautiful trees behind it,” McClusky said. “However, this was still so new, the paperwork couldn’t be generated until the next day. Johnson Development and Perry Homes really worked with us to get everything done.”

“Sienna Plantation has a strong reputation for impressive amenities, top-notch schools, beautiful homes and a warm hometown spirit,” he said. “We expected buyer interest to be enthusiastic with the number and variety of these new designs.”

Tirey said she and Johnathan hope to move in by late August or early September.

“It’s been very fun picking out everything and watching the home take shape,” Tirey said. “We are very fortunate to build our first home together. And Sienna Plantation is such a great place – we just wanted to be here.”

The Village of Sawmill Lake is the first collection of neighborhoods in a 3,700-acre addition to Sienna Plantation announced last year. Builders have begun selling in nine neighborhoods with prices from the $280,000s. The village features 12 model homes and 500 homesites.

A new amenity center is planned to open in the neighborhood next year and Fort Bend Independent School District has plans to open an elementary school and middle school in 2017, increasing the number of on-site schools in Sienna Plantation to seven.

Located in Fort Bend County, Sienna Plantation is a project of The Johnson Development Corp., now celebrating 40 years as one of the nation’s preeminent land developers. 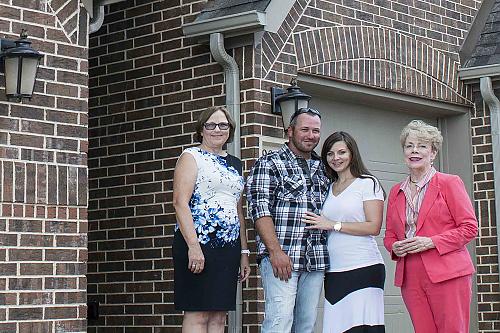