Williams was raised by a single mother in an area in Ponchatoula, La., that he quietly describes as “challenging.”

“We all believed that no one in this area would ever make it out of here,” he said.

But his mother, Ethel Williams, had other plans.

“Learning was very important to my mother,” Williams said. “She only had a 10th grade education, but she was my first teacher. And then, as I advanced in school, I started teaching her.”

Williams said teaching came naturally to him and he became the neighborhood teacher, playing school with other children when he was young and later encouraging them to stay in school.

Helping him along his path were dedicated teachers who were not afraid to use discipline when necessary.

“They cared enough to discipline me when I talked too much, saying they were going to call my mother,” he said.

Williams’ 10th grade biology teacher, Paula Donald, was a motivating force for him.

“She instilled in me what is right and put me on the path to scholarships,” he said. “I was very fortunate and blessed to have teachers like her guide me to where I needed to be.”

Armed with a bachelor’s degree in elementary education from Southeastern Louisiana University and later a master’s degree in administrative supervision, Williams wanted to have the same effect in the lives of his young students. But he faced some challenges.

“I was teaching in East Baton Rouge Parish and there were a lot of needs there,” he said. “Kids had no food, no clothes and no school supplies. I was just out of college and struggling financially to maintain my class and living expenses. My mom and grandma used to help me at least purchase snacks for my students so they would have something to eat.”

After teaching in Louisiana for four years, Williams moved to Houston — where he had visited only once — and taught fourth grade in the Aldine Independent School District. It was during that time that he decided he wanted to do more.

“It took me a while to realize it,” he said. “I had been teaching 10 to 11 years and knew I was making a difference in the classroom, but wanted to do so on a bigger scale.”

Next, he was promoted to principal at Ridgegate Elementary, where he stayed four years before his assistant superintendent approached him about taking the helm at Heritage Rose Elementary, one of four primary schools serving Sienna Plantation.

“Lavanta brings great enthusiasm to his work,” said FBISD assistant superintendent Dr. Xochitl Rodriguez. “He brings a spirit of collaboration and commitment, and is a great communicator, leader and teacher. He has much to offer the Heritage Rose community.”

The day after the 2015-2016 school year started, he was named Fort Bend’s Elementary School Principal of the Year, an honor selected by other district principals.

“I couldn’t believe it — ‘Did they say my name?’ — but after the initial shock, I felt really honored,” Williams said.

Williams has indeed been making a difference during his short tenure at Heritage Rose, setting high standards, bettering communications and holding teachers and students accountable.

“The biggest piece of what we are trying to do here is collaborate to build upon the quality education students already receive at Heritage Rose,” he said. “How much stronger can we be together? How much more can we move our kids, opening doors, minds and hearts?

“We are working toward a growth mindset,” Williams said. “We want to create an environment will students will feel like it’s okay to try and okay to make mistakes, as long as we get up and try again. The kids are excited about their academic growth, and I’ve seen them in the hall celebrating each other on a job well done. And there is a dialogue now between teachers that is very exciting. This campus is moving.”

And Lavanta Williams is again making a difference. 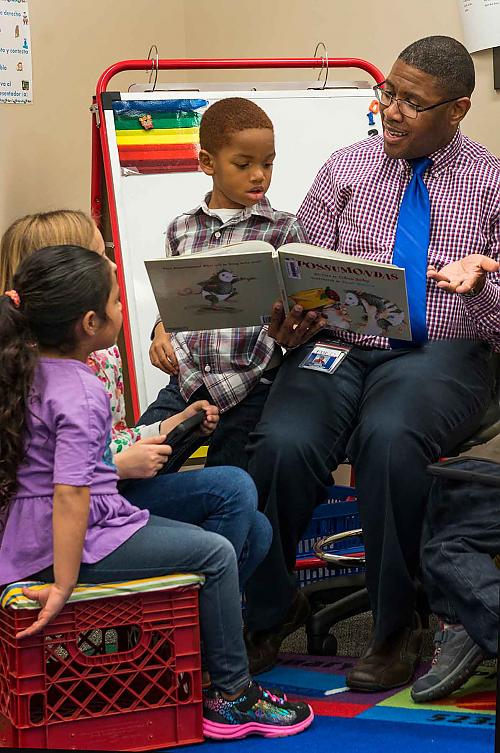