The 15-year-old, self-described CEO Sauce Boss, is the creator of Sienna Wings, the tastiest hot wing sauce this side of New York — which, incidentally is where her inspiration came from. There, her favorite wing place shut down, forcing Tyla-Simone and her mom to figure out the restaurant's recipe. After much tinkering, they developed something better and Tyla-Simone was eager to bottle and sell it.

Fast-forward a few years to today, where Sienna Wings has become a thriving online business. In May, she signed a contract with a local co-distributor and packer, which will allow her to take her business to the next level.

The sauce comes in lemon pepper, spicy and tangy. Single bottles sell for $9.95. A package of all three sells for $29.85. In addition to making tasty wings, the bottles make great stocking stuffers.

Tyla-Simone Crayton and Sienna Wings were recently featured on KPRC Channel 2. You can view the video here. You can order a bottle (or several) here.

We are so proud of Tyla-Simone and look forward to someday seeing Sienna Wings in grocery stores everywhere! 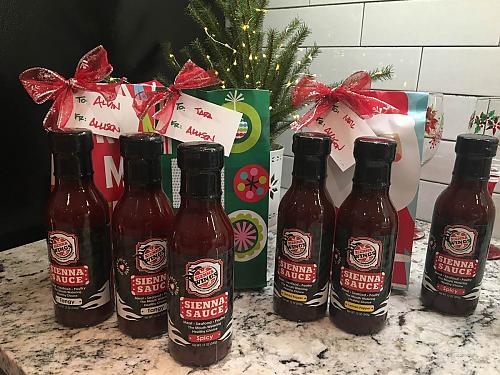