Heavy rain forecast for Dec. 3 has dampened our plans for Frost Fest, so we have moved the flurry of snow-filled fun to Saturday, Dec. 17.

The Fort Bend community’s annual winter festival brings 50,000 pounds of snow to the Village of Sawmill Lake 11 a.m. to 4 p.m. for sledding, snow angels and snow ball fights. The event is free and open to the public.

“People are going to want to make sure they have their cameras and cell phones ready because there will be ample opportunities for great pictures,” said Alvin San Miguel, general manager of Sienna. “In addition to all of the snow, parents can get photos of their children on the world’s largest rocking horse and bouncing around in the world’s largest snowman.”

This year, Frost Fest also features “Snowzilla Jr.,” a wildely popular giant inflatable that functions like a snow covered hill and is the only taboggan slide in the United States. There will also be an ice skating rink, face painters, ornament making and holiday music. Santa and Mrs. Claus will be on hand to greet guests.

Model homes will be open for touring with inflatable pals out front. Families can also give an animal the gift of a forever home by stopping by the Fort Bend County Animal Shelter booth at the Newmark Homes’ model, 9827 Cameron Way.

Finally, hungry snowbirds can choose from an array of food trucks including Flaming Patties, Mary had a Little Party, Main-ly Sandwiches, Pocket to Me and Tila’s Taco Truck — which will also be serving adult beverages. 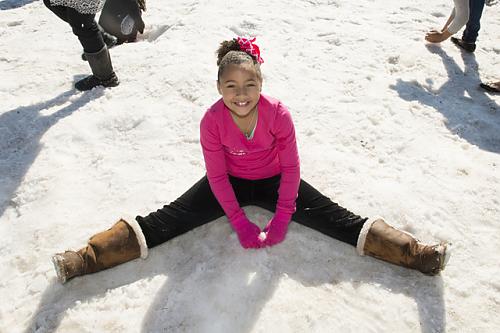