Have a Lemonade and Fight Childhood Cancer in Sienna June 11

Toll Brothers invites everyone to join the fight against childhood cancer — one cup at a time — at its annual lemonade stand in support of the Alex’s Lemonade Stand Foundation at the Village of Sawmill Lake, from noon to 4 p.m. Saturday, June 11.

The goal of Alex’s Lemonade Stand Foundation (ALSF) is to raise money and awareness of childhood cancer causes, as well as fund research into new treatments and cures. The organization holds its annual “Lemonade Days” fundraiser the second weekend in June, raising more than $1 million for pediatric cancer research each year.

Toll Brothers participates in the campaign annually, hosting lemonade stands in several of its communities, including Sienna Plantation. The event — which will be staged at the builder’s model homes at 9806 Maroon Peak and 9810 Maroon Peak — is open to the public and stands are filled with delectable goodies. Donors will be entered into a raffle, with no donation considered too small.

“It is a privilege for Toll Brothers to be able to support Alex's Lemonade Stand Foundation by taking part in Lemonade Days,” said Karl Mistry, Toll Brothers Division President. “We have already received a lot of support from our friends and team members and look forward to our family-fun events at our model homes.”

ALFS emerged from the front-yard lemonade stand of four-year-old cancer patient Alexandra “Alex” Scott. Diagnosed with cancer just before her first birthday, Alex told her parents she wanted to set up a lemonade stand when she was four. Her plan: To give doctors money to find a cure. Her first stand raised $2,000 in one day. Alex continued to set up a stand each year until her death at age 8 in 2004. In 2005, her parents founded ALFS to continue the work Alex started.

Every year an estimated 250,000 new cases of childhood cancer are detected worldwide. It is the leading cause of death by disease in children under the age of 15 in the United States. Despite these statistics, childhood cancer research is vastly underfunded.

Since its inception, the foundation has raised more than $120 million to fund 550 childhood cancer research projects at 102 top hospitals and institutions in the U.S. and Canada. More importantly, it encourages and empowers others — especially children — to get involved and make a difference for children with cancer.

Toll Brothers is a proud sponsor of Alex’s Lemonade Stand Foundation and encourages everyone to come out and make Alex’s dream come true.

For more information or to make a donation, visit www.alexslemonade.org/mypage/1225326. 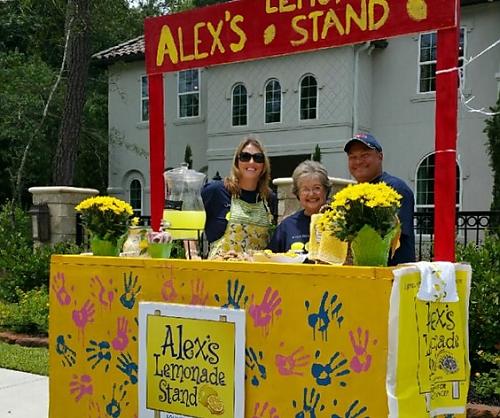