Hats Off to Escalante’s For Adding Valet Service

The one thing I dislike about the Town Center in Sugar Land is the lack of parking outside of the parking garage. Of course, parking is an issue in Houston and most any city. If I cannot park right there in an open parking lot near the establishment I am spending money in, I want there to be valet service. I am more than happy to pay for this convenience. My husband feels the exact opposite and hates to valet. He says he doesn’t want a stranger “messing with this car.” I say, “Mess away if I don’t have to drive into a dark, creepy garage.”

There is valet parking at First Colony Mall (and I’ve never used it because there is adequate parking in the open lots) but other than at Perry’s, I’ve not seen valet at other restaurants there until now. Escalante’s announced it now has complimentary valet on Friday and Saturday nights and Sunday afternoons. This is something they should have done long ago, as there are very few spots outside of the garage to park in. No matter — I’m happy now and will go give them some business because of it. 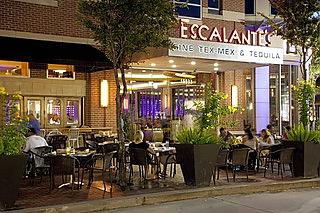 Fadi’s —Where to Get Your Mediterranean Fix
Read More
ARC Training at Sienna Gives Babysitters Valuable Tools
Read More
Mimosas at Another Broken Egg
Read More
The views expressed in this blog are not those of Sienna nor Johnson Development.