The Texas Gulf Coast can be hard on a roof.   We’re told by builders that a roof will last around 18-20 years, yet I’ve seen neighbor after neighbor get a new one and my street is only 12 or 13 years old.   We’d made it through several “wind events” since building this house in 2007.  Last month I found a shingle in the front yard.  One shingle might not be cause for alarm, but since there was a business card on my door I decided to look into it.  I’m so glad that the card was from Doug Provazek of Logan’s Roofing & Exteriors.  I called Doug and he took care of the rest.  It truly was that easy.  He did an inspection and found that we had damage in several places.  It was not a huge surprise after Ike, Harvey (he actually brought a tornado with him to Sienna) and a few other milder tropical storms here & there.  Doug got on the phone with our insurance company, got all the forms complete & sent in, explained to me the next steps and before I knew it a bunch of guys were banging on my roof at 7 am.  Although my two teenage sons were not happy, I was thrilled that in less than 3 full days, I had a brand new, beautiful roof.  Reach out to Doug if you’d like to have him look at yours.   doug@logansroofing.com 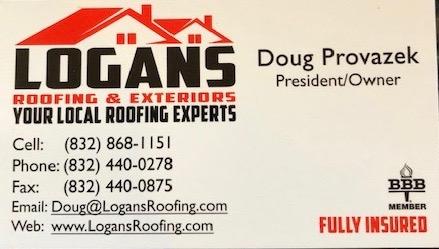 Dorm move In
Read More
Bed & Breakfast
Read More
The Harvest hosts Virtual VBS
Read More
The views expressed in this blog are not those of Sienna nor Johnson Development.